What I learned about myself and my personal design process after moving from the U.S. to Holland.

In September of 2014 my wife and I packed up the kids and the dogs and flew from Austin, Texas to Amsterdam, Netherlands. We were starting a new chapter of our lives, because I accepted a job that required relocating. Though the company did an amazing job of making the transition as smooth as possible (they have a whole team dedicated to supporting international new hires), it was still an enormous undertaking. We had to find schools for our kids; a place to live; re-learn how commerce works (mostly bank transfers here in The Netherlands); register with the local municipality, etc. Translating documents from Dutch to English seemed like our full-time jobs. Thank goodness that so many people in Holland speak English. I’ve always had a certain amount of respect for people who leave their home countries seeking opportunities in new ones, but now I have something even more powerful. Empathy.

The Deep End of the Pool

There was a lot of information to consume, but I wanted to be a good employee. I wanted to learn the company way. I attended various trainings that were offered. I also had some great colleagues who acted as mentors. They shared with me their experiences. They schooled me on how our teams operate. They demonstrated how we generate ideas and how we determine whether an idea is successful or not. They taught me how to fail fast, fail often and aggregate those learnings. But honestly, it was a bit overwhelming. The first six months were really tough.

The Road to Hell is Paved Good Intentions

I was in survival mode. I felt like a zombie, devouring the brains (knowledge and experience) from as many different colleagues as possible. My plan was simple. Find out what worked for other designers and duplicate it. I observed and questioned as many of my colleagues as possible. I even tried mimicking other designer’s design processes, hoping to find some cookie-cutter methods that would guarantee success. Things didn’t quite work out like I planned. It all felt forced. Clumsy. Unnatural. I felt like I couldn’t move fast enough so I tried moving faster. I thought that by skipping the sketching and wireframing stages and going straight to high fidelity mockups I could improve my speed. Unfortunately, this only led to more mistakes. Sometimes I missed steps that were important. Other times I forgot to consider simple interaction details. I was really self-conscious and started to feel like everyone must be wondering how in the world I made it past the interview process. Of course, that was my own internal criticism and not a view that others shared. At any rate, I was not in a good place and I wasn’t sure how to change that.

Common Sense and Freedom from Tyranny

Somewhere around the seventh month of my new gig, I had an epiphany. It occurred to me that one of the reasons I was hired was for my experience. In other words, the processes I developed over the years are valuable, so why was I throwing them out and trying to start over from scratch? I was self-imposing a set of draconian rules about how I thought I should work, based on what I thought my company expected of me. From that point on I decided to go back to my own personal process and work forward to figure out how to best fit it into my new environment. What now seems like common sense, somehow evaded me initially. Not surprisingly, things seemed to get better. I started to feel more comfortable about the work I was putting out. My hypotheses were more sound, my solutions were more comprehensive and the results were generally better. I say generally better, because I still made mistakes and got things wrong. The difference is that I now have a better attitude about my failures and I am less stringent about my process. When I want to explore different Ideas quickly, I like to sketch on paper. If the workflow or interaction is a bit complex I use detailed wireframes. For simpler features (or ones I already have a lot of domain knowledge about) I go straight to high fidelity-mockups or even design directly in the browser. It just depends on the problem I’m trying to solve and who else I’m working with on the project (Product Owners, other developers or working by myself).

5 steps to learning how to fish

Here are a few things that I’ve learned or reinforced over the past year that have been invaluable to my personal growth and development, both in my career and personal life.

One size does not fit all
There is no silver bullet. No rubber stamp design process. Instead, I think of it as a toolbox with a many different tools that do different things. Each problem requires using a different combination of tools. Sometimes you have to be inventive and use chewing gum, tape and a bit of string instead of a hammer and nails.

Perfect is the enemy of good enough
Launching something good is a lot more valuable than launching something perfect. Not to mention, if you think you can make something perfect, you’re delusional. There are so many assumptions we make when creating products. But those assumptions can’t be validated until they are out in the wild. Sure we can use focus groups, usability tests and surveys, but the truth is that there are so many factors that contribute to the success or failure of a product that we can’t predict. So don’t waste too much time trying to guess at things. Put it out in the wild so you can see what is working and what needs improvement.

No lily gilding
To put it simply, don’t over-design. As a designer, I often hear comments like, “It’s just not sexy enough” or “how can we make it more visually appealing?” I’ll admit, I want my designs to be attractive. Not just visually, but from a functionality standpoint as well. I want them to be comprehensive. To have considered every possibile interaction or ancillary feature. But I suggest you join me in fighting this urge and try to start small. Keep things as simple as possible. You can always add or embellish things later. But by keeping things simple, you focus on testing the validity of your concept first. If it proves out, then you can iterate on the details.

Dear Diary…
One of the most valuable things I started doing, is keep a weekly diary of things I learned. These notes covered a wide variety of topics including technical stuff, interpersonal skills, domain knowledge or even relationship stuff. Not only did this help me collect my learnings, it had an even bigger psychological effect. In those times where I was really struggling and feeling like nothing I did was working, I could still find value in my work.

Don’t hate, collaborate
Sometimes I get so caught up in my own “brilliant” ideas that I don’t take the time to share them with others. But I’ve found that the best solutions have been ones I’ve reviewed with fellow designers, developers, product managers, etc. They always seem to provide a different perspective or new insights that I didn’t originally think about.

The last 16 months have had many peaks and valleys, but with a steep upward trend. I think the most important lesson for me has been that every day, every situation is an opportunity to learn. 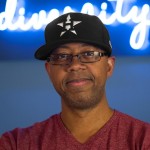 About the author / Keith Aric Hall

Keith Aric Hall is a designer, writer, creator and aspiring entrepreneur passionate about coaching, teaching and facilitating to help others find their passions and use their superpowers to serve others.

How To Satisfy Your Professional Wanderlust
Career - January 6, 2020

Eureka! The Truth About Innovation
Innovation - July 2, 2015
Scroll To Top